The sorry legacy of Hoppy Hall 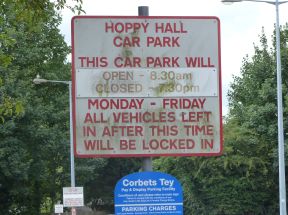 A Royal Mail sorting office, a BP Petrol Station and a car park bearing the name of Hoppy Hall are a sorry legacy for the site of one of Upminster’s oldest houses, whose grounds were graced by one of the majestic cedar trees which grew at many of Upminster’s grandest homes. And as Havering Council appears to have renamed the car park “Corbets Tey Parking Facility” it may be only a matter of time before the historic name Hoppy Hall disappears from Upminster entirely. 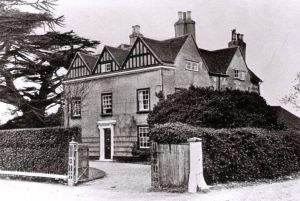 The old house of Hoppy Hall that stood on the site until January 1939 was probably then over 300 years old, dating to the early 1600s or possibly even earlier, and the three gabled frontage was a similar basic design to nearby High House. There is no record of how it got its name. I’ve used the current spelling “Hoppy”, although the house and farm was called both Hoppey or Hoppy Hall at various times and in later years was sometimes named Hoppea Hall.

Wilson mentioned that Sir James Esdaile held the Court Baron for the Manor of Gaynes at Hoppy Hall before he rebuilt Gaynes around 1771. In fact manor courts for Gaynes were also held there between 1821, when it was called “The White House or Hoppy Hall” and 1831 when it was also described as “Hoppey Hall Farm or The Green Farm.”

Wilson believed that Hoppy Hall was one and the same as the property named Gladman’s, referred to in Morant’s History of Essex, which consisted of “one messuage” 40 acres of arable, 32 acres of pasture, 8 acres of meadow and 6 acres of wood, 86 acres in total. Gladman’s was owned by Ralph Latham and on his death in 1557 it was bequeathed , along with his manors of Gaynes and Upminster Hall and other premises, to his eldest son William. If the early 17th century date for Hoppy Hall is correct then this would coincide with the Latham family’s ownership.

A map of the Manor of Gaynes dated 1752 describes the farm as “Mr Groom’s lands” and Hoppy Hall later became one of many Upminster properties owned by James Esdaile through his wife Mary Mayor. Afterwards Hoppy Hall was occupied by Esdaile’s family members: one was John Mayor, most probably Sir James’ brother-in-law rather than his wife Mary’s father John who had died in 1743, and then by Benjamin Hammett, Sir James’ son-in-law, before the house and farm were leased to his son James Esdaile in 1783 for 21 years for £134 per annum.

The earliest description from 1819 refers to “a neat house” with four attics and a “closet” on the top floor; four good bedrooms and closet on the first floor, with a ground floor comprising a hall, front parlour, back parlour, kitchen, brew-house, plus cellars. Wilson described Hoppy Hall as a “capacious square timber and plastered building with three fronts and square clustered chimneys”.

It was therefore more in keeping with a large farmhouse than a gentleman’s residence and was very much a working farm with stabling, cow-house, poultry house, piggery, cart and cattle sheds. The farm, including the homestead, which comprised just over 98 acres through much of the 19th century, was mainly arable which Wilson described as “of loam of the first quality”.

The farm was bounded to the north by the Rector’s Glebe (now Upminster Park), to the east by Corbets Tey Road down as far as Gaynes Cross, at what is now the junction with Little Gaynes Lane, and the southern boundary ran along Little Gaynes Lane, with the River Ingrebourne forming much of the western boundary. 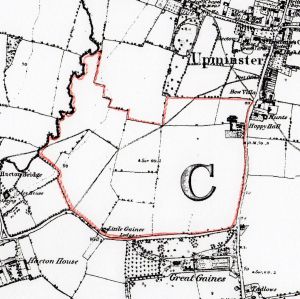 The farm’s land holdings had changed before that. The 1752 map mentioned above showed that a field opposite Gaynes Park, in later years known as “Image Field”, had then been part of the Gaynes Park Estate. Wilson records that this eight acre field, “formerly planted round with trees”, contained “upon a pedestal in the centre” a female figure, draped “but whether antique or modern is not remembered”. He surmised that the statue was probably taken down at the time that Esdaile’s Gaynes mansion was demolished but as the field was then already part of Hoppy Hall Farm this may well have been earlier.

The Esdaile family sold Hoppy Hall in 1819 along with their other properties and the Reverend John Clayton became the new owner; on his death in 1843 it passed to his family.

The house and farm continued to be let to tenant farmers. Samuel Hammond junior succeeded James Esdaile as the tenant in September 1804 and his marriage the following month to Elizabeth Nokes, daughter of James Nokes of Hunts Farm, the owner of Upminster Mill, united two of Upminster’s leading Nonconformist families. 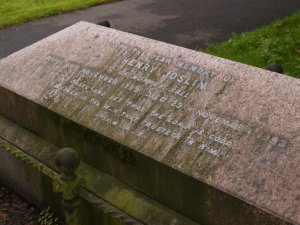 Samuel Hammond was the tenant at Hoppy Hall until September 1841 when he was succeeded by Henry Joslin senior, previously the tenant farmer at the adjoining Park Corner Farm. The annual rental, which had risen to £174 in 1819, had now reached £250 per annum, almost double the rate from 1804. Henry Joslin also farmed the other Upminster properties owned by the Claytons, with a total of 405 acres in 1851, employing 34 labourers, and more than doubling to 826 acres, worked by 55 men, 20 boys and four women in 1861. He continued to live at Hoppy Hall until his death on his 84th birthday in 1883, and afterwards his widow Priscilla lived there until her own passing in 1889. Their daughter of the same name lived there until moving to live with her brother, Henry Joslin junior, at Gaynes.

The house itself was then let to non-farming tenants. One of the first of these was John Williams Benn, a Progressive Party member of the London County Council, and grandfather of the late Tony Benn MP. The Benn family – five children and servants – moved to Hoppy Hall in September 1891 and each of the children had their own room on the top storey “which had timber floors so twisted that they resembled a rolling sea”. Although like many old houses Hoppy Hall had been modernised it then still retained some vestiges of the past, such as an old panelled door with wrought iron hinges and an old fireplace typical of the Tudor era.

In July 1892 Benn was elected as a Liberal Party MP for St Georges in the East, after an election campaign involving the help of his wife Elizabeth, sons, brothers and other employees at his publishing company of Benn Brothers. 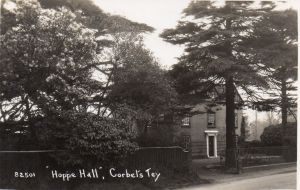 Hoppy Hall was memorable for a magnificent cedar tree on the south lawn, which along with the similarly majestic cedar at High House, was said to be the pride of the village. By the time of the Benn family’s occupation this tree was more than a century old, having been originally reared at the Esdaile home of New Place before being moved to Hoppy Hall in the 1790s when it was about 12 feet high. By 1880 the cedar was 45 feet high and 15 feet round, with a spread of 98 feet, and although many of the finest branches had fallen it remained a fine specimen when the Benns moved in. One long branch projecting over the lawn appealed to John Williams Benn as providing a natural stage for a dramatic presentation. In July 1893 all the Benn family and many local people gave several performances of three scenes from Shakespeare’s A Midsummer Night’s Dream (or Mydsomer Nyghte Dreame as they titled it). J W Benn not only produced events but also took the role of Bottom, with his son William Wedgwood Benn and his sister Maggie (Margaret) Benn respectively playing Oberon and Titania, King and Queen of the Fairies. The event was preceded by Mendelsohn’s Overture, played by Mr George Pope on violin, accompanied on piano by Robert Benn, youngest brother of the organiser; all proceeds from the popular event went to charity.

J W Benn’s father the Rev Julius Benn was a Congregational Minister at Wapping and it was natural that during their stay in Upminster the Benn family should worship at the Congregational Chapel on Upminster Hill, where W W Benn taught at the Sunday school. The family’s happy stay at Hoppy Hall was to be short-lived as financial problems forced Benn to give up the lease and leave Upminster. Wilson dates this to 28 June 1894 but Higgins’ 1984 account of the family’s history appears to date this to the following summer of 1895 – a date supported by the membership roll of the Congregational Church.

The Benns’ successors at Hoppy Hall were Arthur Williams and family, who remained there until their new home of Upminster Court was completed in 1906. The next tenant was Archibald Stormont Gibbs, Director of a Cement Manufacturing company based at West Thurrock who lived there with his family until his death in 1923.

Henry Joslin junior had completed the purchase of Hoppy Hall, in 1887, while his mother still lived there and he remained the owner until his death in November 1927, after which his estates were put up for sale. 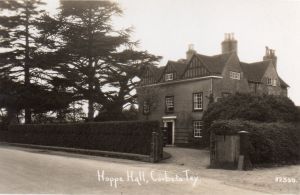 By 1934 Hoppy Hall was hemmed in on three sides by new buildings and in October the following year Eve decided to sell up, finally announcing his departure in February 1938. When Hoppy Hall was auctioned three months later it was bought for £5,000 by Alex MacGregor, a local builder whose estate office was at 113 Corbets Tey Road. Although McGregor said he had no immediate plans to develop the site, he attempted to find a developer but when discussions broke down, the fine old house was demolished in January 1939. Officials from Hornchurch UDC obtained a Tree Preservation Order in March 1939 but arrived too late to stop the felling of the landmark cedar tree. 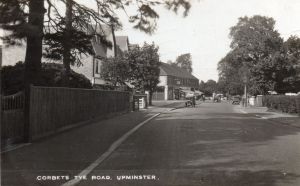 The war delayed development and it was only in May 1946 that the Hoppy Hall site was put up for auction as “suitable for the erection of a cinema, shops and flats”. The County of London Electricity Company bought a small part of the site and built an electricity sub-station. Part of the rest was sold to the Post Office in 1952, on which the sorting office was later built, and in 1957, when Hornchurch UDC were seeking sites for car parks, the remaining half was sold to them for this purpose.

Although nothing now remains of Hoppy Hall, part of the estate does survive – the property known as Little Gaynes Cottage (78 Little Gaynes Lane), towards Hacton Hamlet. This was formerly one of two cottages, the other of which seems to have been removed in the 1930s.

Wilson referred to “two old cottages called Little Gaines, said to be the remains of a large houses, but they exhibit no features which confirm the statement”. It’s unclear if the cottages are shown on the Andre & Chapman map of 1777 but they are certainly recorded on a parish survey of 1799. They were probably two-up, two-down farm workers cottages, as the 1911 census shows them as four and five roomed, including kitchen. 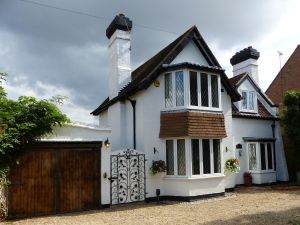 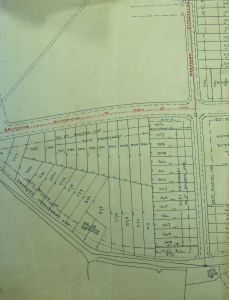 The Romford Rural District Council Building Registers records additions to the cottages in 1913 while the 1929 Sale catalogue of the Gaynes Park estate says that one “recently rebuilt” contained living room, scullery, larder and three bed rooms and the other a sitting room, kitchen, scullery, larder and three bedrooms; both had an outdoor earth closet.  It seems likely that the one that referred to as recently been rebuilt is now 78 Little Gaynes Lane, while the other was demolished, leaving the former party wall to the east side. The adjacent site remained vacant for some years, probably until the adjacent properties, now numbers 74 & 76, were built in the 1950s.

So it seems likely that when the old Hoppy Hall car park signs are removed, that the 200+ year old Little Gaynes Cottage may be one of the few things locally that have any historic links connection to Hoppy Hall, one of Upminster’s oldest and historic buildings. 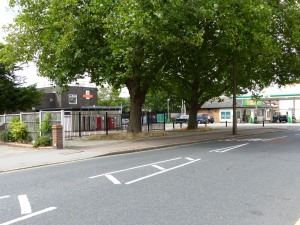 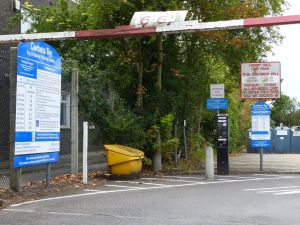 3 Responses to The sorry legacy of Hoppy Hall