As you travel up Hall Lane, past the golf clubhouse at Upminster Hall on your right, just before you reach the roundabout with Avon Road, on your left stands the grand and recently restored Edwardian mansion of Upminster Court, overlooking the Ingrebourne Valley.

After a chequered history of several decades which saw various Council uses and general neglect, the property is now the headquarters and training centre of Uniserve, a large international freight and logistics who after buying the premises in January 2007 restored and converted the listed premises to its current use.

Upminster Court was listed Grade II in 1979 and the listing describes the building as a:

“Substantial Country House in the Wren revival style. Red brick and Bath Stone with roof coverings of Westmoreland slate”.  As originally designed it comprised on the ground floor a large south-facing drawing room, a large dining room, a billiard room, boudoir and library, plus kitchen, scullery, servants hall as well as storage and a lavatory. On the first floor were six bedrooms, two with adjacent dressing rooms, a nursery school room plus three bathrooms and WCs, while on the third floor in the roof, were eight servants’ bedrooms with further servants’ quarters housed over the stable and garage block to the north.”

Upminster Court was built as private residence for Mr Arthur Williams in 1905-06. Arthur Edward Williams was a Director of Samuel Williams & Sons of Dagenham Dock, and brother to Mr William Varco Williams of Langtons in Hornchurch.  In 1887 Arthur’s father Samuel Williams had bought 30 acres of land at Dagenham Breach and built a timber dock on the Thames with a railway line connecting with the London Tilbury & Southend railway line.  The new Dagenham Dock was mainly used for coastal coal deliveries from the north of England and Samuel Williams company spent years filling in the marshland and lake behind his dock with soil excavated from the London underground system transported in Williams’ own fleet of lighters.  It was Arthur Williams, his youngest son, who was to prove crucial in this land reclamation work as he was a civil engineer who designed and developed steel reinforced piles used to pile the Dagenham jetties on the marshy banks of the Thames.

Arthur Williams had studied at the Crystal Palace Company’s School of Practical Engineering from January 1883 when he was still 17 and completed the mechanical and civil engineering course before working in the family fitting shop at Battersea in 1885-86, then taking charge of their fleet of steam tugs and dredgers until 1887. It was from April 1887 onwards that he was involved with the Dagenham Dock project which proved so vital to the company’s expansion and growth. In 1895 Arthur and his brother Alfred joined their elder brothers William Varco and Frank as partners in the firm of Samuel Williams & Sons.

Arthur and Blanche Williams made Upminster their home after their marriage in 1891,  initially living at Mavisbank, opposite Upminster church, before leasing Hoppy Hall after J. Williams Benn departed in about 1895, where they had raised a family of three children, three sons and a daughter. Arthur Williams played his part in parish life, becoming a churchwarden at St Laurence’s Church in 1895 and continuing in that role until 1908.

In March 1905 Arthur Williams took a lease from the Branfill family on a plot of land on the west side of Hall Lane and engaged a well-established London architect and Upminster resident Charles Reilly, FRIBA whose London practice was at 23 St Swithin’s Lane, WC1 and who also acted as architect and surveyor to the Worshipful Company of Drapers.

No doubt the Williams family at Hoppy Hall had come into regular contact with Charles Reilly and family after they bought High House in 1902 and it seems a logical choice to ask the experienced architect Reilly to design their new home. It’s unfortunate that Charles Reilly does not receive the credit due to him as the architect of Upminster Court as his more famous son, Charles Herbert Reilly (later sir Charles Reilly) has wrongly identified as the designer – indeed it’s likely that this error may have been a factor in Upminster Court being listed.

Charles Reilly senior’s design was submitted to the Romford Rural District Council for approval in August 1905 and was also submitted for consent to John Arthur Capel Branfill, one of the Trustees of the Branfill estate.  After receiving both these consents in September 1905, work then began on building Upminster’s last great family house.

Upminster Court, around 1906, with building works close to completion

The Upminster Court works were carried out by one of the most prestigious master building firms in London, Holland and Hannen, who at that time were also in the process of building the Prudential Building in Holborn, and were later to build the Cenotaph in 1920 and County Hall two years after that. It has been said that the building used bricks made locally at the nearby Upminster brickworks, which at that time was still in business.

Upminster Court was approached down a drive, bordered by newly-planted trees on either side. The main door opened into a spacious hall, some 17 feet by 17 and ahead was a sunken billiard room, some 25 feet by 10.  There was an impressive large drawing room, some 28 feet long, plus an extra 6’ 6” into the south-facing bay and 20 feet deep, a dining room of 24’ 6” by 18’ and a library, 18’ by 11’. A large kitchen, scullery and servants hall were beyond the dining room. 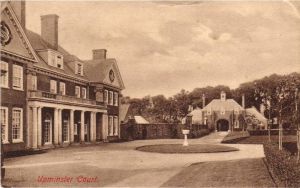 Upstairs the master bedroom of 18’ plus a 6’ 6” bay by 17’ wide, and an adjacent dressing room and bathroom, occupied the south-facing end of the mansion, with three other large bedrooms and a day nursery & school room, with an adjoining child’s bedroom on the same floor. On the second floor were five more bedrooms, and three maids’ bedrooms. Further bedrooms for grooms and other staff were over the stable block, to the north of the mansion.

The house opened out onto formal landscaped gardens to the south and west, including a walled Italian garden, a bowling green and croquet lawn making a perfect setting for a gentleman’s country house, with its views looking down over the still unspoilt Ingrebourne Valley.

The sale of the site on 26 October 1907 from the Branfill family to Arthur Williams for £3,000 probably marked the completion of the works and the Williams family were at last able to move into their purpose-built home.  By the time the house had been completed the two older sons Arthur Lawrence (known as Lawrence b.1892) and Samuel Williams (b.1893), were probably already away from home much of the year at boarding school.  The 1911 census records the style in which the family and their retinue lived at Upminster Court, with a nurse and nursery maid for seven year old Henry, a cook and kitchen maid, a parlour maid and two nursemaids. A coachman, housekeeper and two gardeners lived in cottages on the 20 acre landscaped estate – this compared to the nurse, cook and parlour maid which the family had employed at Hoppy Hall ten years previously. 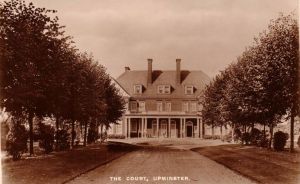 Arthur Williams took over the running of Samuel Williams & Sons in 1937 after the death of his elder brother William Varco Williams but retired two years later, moving to live in Devon, the county of his wife’s birth. Not long her death in early 1946 Arthur Williams sold Upminster Court and its 19 acres of land to Essex County Council for £12,500; he died aged 85 in Devon in 1952 leaving at estate worth over £156,000.

The vacant Upminster Court was used to accommodate refugees during the Second World War and after it was acquired by Essex County Council in 1946 it was used it as their education offices and ownership transferred to Havering Council on 1 April 1965 when local education responsibilities were transferred to the new London borough. Havering Council continued with this use until 1974 when it was converted to a short stay Respite Care Home for Older People and when the residential care home closed in 1991 the building became a training centre for the council’s staff.  By then internal modifications had been made, and in the fashion of the time suspended ceilings were added in some rooms, cutting through the original moulded Edwardian plasterwork.

Uniserve have carried out extensive restoration of the listed buildings to a very high standard. However, these remain unseen as the premises have not to my knowledge been opened to the public on occasions such at London Open house weekend – we can only hope that this will take place in future, as it was promised in the original planning application.

I was fortunate to arrange a visit in January 2018 and some photos are below. 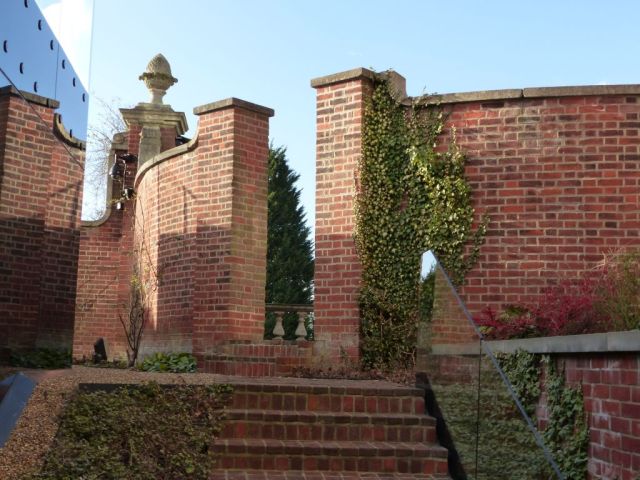 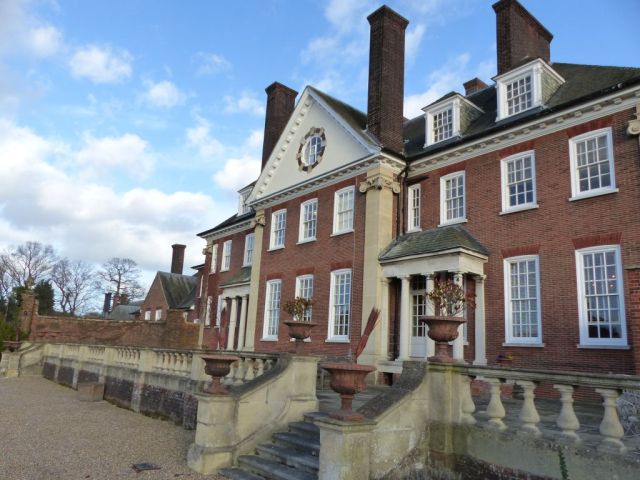 4 Responses to Upminster Court – final flourish of the great house