Who was Sir James Esdaile?

Those familiar with Upminster’s history will know that Sir James Esdaile (c.1714 to 1793) was a major land-owner who was responsible for rebuilding many of Upminster’s largest residences and buildings including Gaynes, New Place, Harwood Hall and the Bell Inn.  They may also be aware that he served as Lord Mayor of the City of London and have read of his family’s Huguenot origins but what else is known about him?

Let’s start with what we don’t know: there is no record of James Esdaile’s birth or baptism which probably took place in the latter part of 1714, based on his age in later records.

The first definite record of James Esdaile comes from his apprenticeship indenture to Daniel Medbury, Citizen and Cooper of London for seven years from 5th May 1730 for a premium of just £5.  His father was named as Peter Esdaile, girdler of St Giles Cripplegate. Daniel Medbury was an experienced London cooper of Northamptonshire origins, and James Esdaile completed his full term as an apprentice with him and received his Freedom of the City of London on 7th June 1737.

Was his father the Peter Esdale or Easdill, a brushmaker of Cock Alley in Norton Folgate who had four children baptised at the Bishopsgate Presbyterian Chapel: – Katherine (31 May 1713), Peter (20 July 1716), Thomas (2 April 1718 and another Katherine (17 January 1719/20)? The latter baptism described Peter Easdill as “formerly” of Cock Alley, Norton Folgate, but “now over against the Kings Head in Chiswell Street” in Cripplegate parish. If James Esdaile was this Peter’s son it’s feasible that he was born in the Autumn of 1714, midway between the births of Katherine and Peter.  “Cathrine” wife of Peter “Esdill, brushmaker” was buried at St Giles Cripplegate on 6th October 1724, so if the identification is correct James Esdaile’s mother died when he was not quite ten years of age.

Rating records from 1734 onwards for St Luke Old Street show Peter “Risdale” rated for premises valued at £12 annually in Bunhill Row (now Finsbury, EC1). The records show variant spellings of Arisdel and Aisdell, but these are probably more a reflection of the clerk’s lack of literacy.  From 1737 Peter Esdaile was also rated for personal estate worth £50 and in later years also occupied premises nearby in Twisters Alley, just to the north of Bunhill Row. Were these two Peters one and the same? The address of Peter Easdill in 1719/20 was certainly close to Peter Esdaile’s later Bunhill Row address. Had the brushmaker become a girdler within the space of 10 years, with strong enough social connections to apprentice his son to a Citizen and Cooper of London? 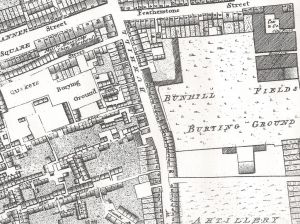 Peter Esdaile’s house was at 110, Bunhill Row opposite the former Artillery Grounds and the famous non-conformist burial ground of Bunhill Fields (formerly known as Tindal’s Burying Ground) , where he was himself laid to rest in 1758.  This house is numbered on Horwood’s map of 1792 (see left) and its location can also be seen on Roque’s map of 1746 (above); its location is now covered by a block of flats, Finsbury Tower (see photo below).

Looking north up Bunhill Row today – site of Esdaile’s house on the left.

Peter Esdaile not only lived here but also developed his growing girdler’s business in his workshop and manufactory where he and his employees made various leather girdles and accoutrements for the Marines under lucrative contracts with the Admiralty which made him a wealthy man by time of his death in 1758.

Later accounts state that Peter Esdaile was the son of Baron d’Estaile or d’Esdaile, a French Protestant who fled from his native land along with many others of his faith after the Revocation of the Edict of Nantes in 1685 made Protestantism illegal there.  It’s said that his property was confiscated and he was forced to live and die in obscurity.  It’s certainly true that the Peter Esdale or Easdill mentioned above – who may or may not be the father of James – lived at the heart of a Huguenot community in Norton Folgate, near Spitalfields, but I’ve yet to find any trace of this shadowy ancestor Baron d’Esdaile.  What we do know from Peter Esdaile’s will is that he had a brother Garrett, whose son James was later of Beccles, Suffolk and Hoddesdon, Herts but again as yet my research so far has found no other reference to Garrett Esdaile either.

Suggestions in other sources link James Esdaile to an Archibald Esdaile (c.1687-?1769) of the Island of St Christopher’s (St Kitts) who married Rebecca John at St Paul’s Cathedral in 1726. This Esdaile family were established on St Kitts as early as 1696 and in January 1708 John Esdaile, aged 43 (i.e. born c.1664) , was listed as living there with his wife, four sons, three daughters and seven slaves. Was this John Esdaile the father of Peter Esdaile and grandfather to James? Further detailed research would therefore be needed to confirm or disprove the Esdaile family’s origins.

James Esdaile’s apprenticeship indentures meant that he could not “contract matrimony” within his seven-year term: on 24th August 1738, twelve months after receiving his Freedom, he married for the first time at St Mary Islington, his bride being Elizabeth Pate, the 22 year old eldest daughter of William Pate of St Margaret, Westminster.  His marriage licence application described him as aged 24, of St Luke’s (Old Street), and his bride was two years younger. Interestingly he was described as a girdler, not a cooper, the trade in which he had just qualified, so it’s likely that he was already in business with his father.

The couple settled close to James’ father Peter and may even have lived with him in Bunhill Row. Two children died in infancy and were buried in the nearby non-conformist Bunhill Fields burial ground, but Elizabeth bore three healthy offspring, Ann (born around 1740), Peter (born 1743) and Louisa (born 1744).  Elizabeth died in April 1747 aged 31 and was herself laid to rest in Bunhill Fields leaving James Esdaile without a mother to his three young children. In the circumstances it’s surprising that he waited over eighteen months to remarry.

His new bride Mary Mayor was just 17, born in August 1731, half the age of the 34-year-old widower James Esdaile. Mary was an heiress, bringing with her a substantial dowry, including the rights to inherit the 65 acre New Place estate in Upminster, thus providing James Esdaile’s first links to the parish.  The couple married by licence in St Paul’s Cathedral on 29 November 1748.  Mary was the daughter of John Mayor, Citizen & Lorimer of London, who had died five years before but her inheritance mainly came from her childless uncle and aunt, Joseph and Sarah Mayor of New Place, Upminster who were her guardians and through her marriage settlement endowed her with freehold estates in Upminster and Hornchurch.

It must have been a daunting task for the teenager to take on three young children aged between four and eight, but the family no doubt had servants to take care of things.  Mary Esdaile soon had a family of her own, and after the loss of an infant daughter after a few years of marriage, gave birth to eight healthy children in the next 16 years. James and Mary’s marriage was to last until her death in 1792, aged 60.

James Esdaile was certainly in partnership with his father by 1748 as in April that year the business was described as Peter Esdaile & Son in a contract with the Admiralty to supply 1,000 sets of leather accoutrements for the Marines to specified quality standards in just 10 days; another Admiralty contract in 1755 was for slings and belts.

Throughout this time the growing Esdaile family continued to live in Bunhill Row but in 1757 and the following year their fortunes were to change.  On Sarah Mayor’s death in July 1757, Mary Esdaile inherited New Place and other estates, and less than a year later James’ father Peter Esdaile died, with his son his principal beneficiary of his substantial estate, which also included bequests totalling £8,000.

On 23 May 1760 James Esdaile bought from George Montgomerie what he later described as a “cottage and lands” at Upminster – this was the Gaynes Estate which in 1752 had comprised around 103 acres.  On the same day he also bought from Montgomerie, who retained the Lordship of the Manor of Gaynes, two strips of the manorial waste, one in front of his house at New Place, and the other running along what is now Corbets Tey Road.  The strip in front of New Place allowed him to create an in and out entrance, as part of his major redevelopment a few years later while the strip on Corbets Tey Road later became the site of Esdaile’s Numbers 1 to 10 Post Office Cottages.

It seems likely that the Esdailes split their time between their London house in Bunhill Row, where James Esdaile continued to run the profitable business, and their new country estate in Upminster, particularly after New Place was completely rebuilt in the early 1770s.  Esdaile was by now at the height of his business career and from 1766 onwards came to prominence in the City of London. He was elected as Sheriff of London in 1766, after difficulties in attracting candidates and during his year in office he was elected as an Alderman of Cripplegate Ward in February 1766 and also became Master of the Coopers’ Company.  Ten years later in 1777 he achieved the highest civic honour when he was elected as Lord Mayor of London and in June 1778 during his year as Mayor he was knighted by the King for bringing forward a scheme to raise a subscription to fund the forces, who were engaged in the American War of Independence.

It was during this period from the 1760s onwards that Esdaile spent considerable sums in acquiring and redeveloping many of Upminster’s buildings. The most elegant was Great Gaynes, which was redeveloped after Esdaile acquired the Lordship after Montgomerie’s death in 1766.  His acquisition of London’s (as it was later known) added land south of the stream which was dammed to form the lake.

In 1771 Esdaile acquired Hunts from William Braund for over £3,000 and had rebuilt the property by 1777. Also around 1771 he acquired the estate called Harwoods on which Harwood Hall was built in 1782 for his daughter Mary, who married George Stubbs in 1777. Esdaile’s acquisitions continued when he bought Tadlows Farm, south of Hunts around 1780, probably rebuilding the farmhouse, by which time he already owned Hoppy Hall to the north of his Gaynes estate.  Bushes Farm was acquired around 1782, in a purchase which also brought Esdaile the farms called Snows and Elders.

From 1760 onwards the Esdailes entered another stage of their life as that year James’ eldest daughter Ann, 20 was married at Upminster to the elderly widower John Hopkins (d.1772) of Bretons, in Hornchurch and in 1765 Louisa Esdaile, also just 20, married Benjamin Hammett, a London merchant. In 1781 Hammett (later knighted) joined with his father-in-law Sir James Esdaile and brother-in-law William Esdaile (James’ son) to found Esdailes, Hammett & Esdaile Bank in Birchin Lane, moving to Lombard Street the following year.

Sir James also became the owner of a share of the major Rose Hall Plantation in Jamaica from around 1787.  His other interests included serving as Colonel of the Green Regiment of the London Militia from 1763 to 1789 and in his obituary he was said to be a great collector of prints, which were then at the height of their popularity.

Mary Esdaile died on the 21st February 1792 and was interred at Upminster, where she is commemorated on the same wall tablet in the parish church as her husband, who died at his house in Bunhill Row a year later, aged 78.  His lengthy will, which established a complex series of trusts for his children and grandchildren, was in later years to provide lawyers with much work, no doubt well paid.

Although several branches of his family went on to make a name for themselves, the Esdaile family’s connections with Upminster did not last beyond 1820 and proved to be a disappointing postscript to Sir James Esdaile’s remarkable career and strong influence on the parish.

17 Responses to Who was Sir James Esdaile?