Visitors passing through Upminster and local people going about their business could not fail to see, hear and smell the popular working smithy at the heart of the village, adjacent to the Bell. For much of its existence the business was operated by members of the Eldred family, but while the Georgian Bell premises survived for almost two centuries, the adjacent smithy had a much shorter life span.

Although it’s generally reckoned to have been built at a similar time to the Bell in around 1765, its documented history mainly dates to 1 January 1799 when 24-year-old John Eldred and his new bride Sarah Patten came to Upminster, where they were to stay for the rest of their lives. There they raised four sons and two daughters and established a thriving blacksmith’s trade in the heart of the village in the smithy owned by the Esdailes.

John Eldred came from a very old family of Essex blacksmiths and succeeded John Rowley who had taken over the smithy soon after his marriage in June 1788 to Elizabeth Lumley, who is shown as the occupier of the premises from 1787. She was the widow of William Lumley who may have been the first blacksmith at the new premises – he is listed in the parish rate books from the summer of 1761.

John Eldred was a well-respected parish figure who served the parish constable for many years and was appointed by his neighbours John Chapple (the parish clerk) and James Purkis (publican of the Bell) to act as a trustee and executor under their wills. He was a staunch non-conformist, whose younger children were baptised at the Upminster Hill chapel, and from his will written in 1840 it is evident that he was a devout and religious man, with the disposal of various religious tracks prominent among his bequests.

In its heyday the smithy comprised four forges, a farriers shop, iron warehouse and workshop and formed what must have been a very large business (the family also ran the blacksmiths shop on Upminster Common).

In 1956 John Eldred’s granddaughter Constance described the interior of the forge as follows:

Just inside the door on the right was one fireplace with bellows, another was further back on the east side with bellows, anvil and water trough for cooling hot irons. The large coalhouse was just beyond the bellows. This fireplace had a platform to put tyres on to heat. Further along towards the south was an iron platform fitted in the floor to fit the iron tyre on a heavy farm cartwheel.

Next was a large grindstone and the iron house. On the west of the platform was the other fireplace with bellows, anvil and water trough and bench and dulling tool.

John Eldred was succeeded by his two younger sons James and Joseph, and on the death of the latter in 1889, Joseph’s son Samuel took over the business. Things probably continued much as before until in June 1906 Samuel had to move out of the house adjacent to the forge as it was compulsorily required to aid the expansion of the Bell. He moved to live in a nearby cottage in The Avenue, but after his death the following year the Eldred family’s connection with the Upminster smithy ended. 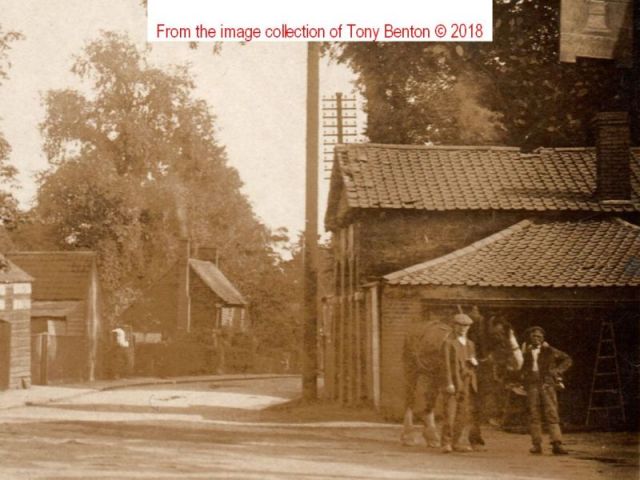 Upminster’s smithy towards the end of its life c.1917

The smithy however, seems to have continued unchanged.  The new occupier of the smithy was the delightfully named Horace Horatio Nelson Hawkins (known as Nelson) who moved to Upminster from Haverhill, and was one of a family of well-established Essex blacksmiths originally from Belchamp Walter. Hawkins lived at 42 St Lawrence Road, running the smithy with the assistance of his son Frederick. Nelson and Fred’s occupation lasted until the late summer of 1919 when the owners gave them notice to quit and put the premises up for sale by auction. It was reported that the Hawkins family were planning to emigrate to Canada, where their daughter already lived, but this doesn’t seem to have taken place as Nelson Hawkins and his wife Jane both died locally in the early 1930s.

It must have been galling for Nelson and Fred to see the smithy standing empty for over five years while the Henry Turnell, publican of the Bell, unsuccessfully tried to get approval for his building expansion. The empty smithy building seems to have only been pulled down in 1925, as the development and widening of St Mary’s Lane gathered pace.

So no more would passers-by see the village blacksmith shoeing horses or carrying out the other aspects of the iron craft in the heart of Upminster and another part of Upminster’s village traditions was lost after almost 150 years.