The Holden Family – Rectors of Upminster

The Holden family had a remarkable unbroken sequence of almost two hundred years when five successive members of the family held the Rectorship of Upminster from 1780 to 1971.

The Holden connection with Upminster dates from the purchase by William Holden a Birmingham merchant of the advowson of Upminster – the right to present to candidates to the living of Rector.  William Holden had married Mary Rose, an heiress from Daventry in September 1748, and although she died just four years later soon after giving birth, her maiden surname Rose lived on through successive generations of the family.

On 22 March 1780 William Holden presented his eldest son John Rose Holden (born 1752) as the new Rector.  The new Rector spent much of his time in his London home and appointed a series of curates to minister to his parishioners’ needs, including from 1795 his son also named John Rose Holden.  Throughout his Rectorship John Rose Holden the elder had a series of disputes with his parishioners but the most series came in the late 1790s.  The Rector’s income was mostly derived from the ”tithes” – the right to collect a tenth of all the produce in the parish. By this time these had been collected as a fixed cash payment and in an era of inflation the Rector found the real value of his income was falling each year. On 30th May 1798 he gave notice to land owners and occupiers that from May 1799 he wished to collect his tithe “in kind” – actual produce or livestock. This caused much ill-feeling and on the day this change was due to take place – 8th May 1799 – the Rector resigned, leaving his 26 year old son to pick up the pieces.

If the parishioners thought that things might improve they were mistaken, for John Rose Holden the younger pursued the cause with just as much diligence as his father.  In fact things actually got worse as the Rector unwisely leased the collection of the tithes to a Mr William Winton Edwards for £700.  Edwards’ collection methods caused even more antagonism with the locals and his lack of success led to him take the Rector to court.  This tithe dispute was one of the main factors which led a group of leading parishioners to set up their own Congregationalist meeting in 1800 and to build the Chapel on Upminster Hill which opened in 1801.

J R Holden the younger’s difficult relationships with his leading parishioners were further inflamed by the unpopular Rev James Bearblock, Holden’s curate at Upminster from 1817 onwards.  He was strongly opinionated and in the late 1830s Champion Edward Branfill of Upminster Hall found remarks in one of his sermons so personally offensive  that he took his family out of church, never to return again.

Two events finally resolved and improved the local conflicts. The parish tithes were commuted into a cash payment after 1840 and the Rev Bearblock retired in 1839.  The Rector’s relationships improved and he was fully involved in parish life such as the setting up and management of the National School. The Rector’s final and longest-lasting contribution to Upminster came at the end of his long incumbency of almost 63 years, when he contributed offered the sum of £1,000 towards the £1,278 cost of rebuilding St Laurence’s parish church.  Sadly the Rector did not live to see the final results of his benevolence as he died on 28 January 1862, aged 89, a month before the newly rebuilt church was reopened.

His successor was his 39-year-old nephew Philip Melancthon Holden who had a striking presence and flamboyant style of dress – he once drove a white pony in a white carriage, with white harness and whip, attired in a white dress and hat.  Philip Holden had a powerful and resonant voice and he became renowned throughout the neighbourhood for his brilliant oratory. Sunday services at St Laurence’s Church were soon crowded with local parishioners and visitors from miles around.  He also gave public recitations including readings from Shakespeare, which attracted large and appreciative audiences.

Philip Holden’s popularity was short-lived and “complaint, dissension and disputes arose in the parish”. For much more colourful information about this character – read his story here!

P M Holden died in June 1904 aged 81 and his successor was Rev Hyla Henry Holden, nephew of the late minister, aged 30 and with a wife and three young children aged four or younger.  Rev Holden made major changes to religious life, soon doubling the number of Sunday services from two to four and celebrating communion at least weekly instead of monthly.  The new Rector, as a follower of the “Oxford Movement”, changed the style of worship, restoring what was later described as the “Faith of our Fathers”. The community was involved in the life of the church: a parish magazine was introduced, a scheme for warming the church was successfully carried out, making the church warm and dry. A new choir were kitted out with new cassocks and surplices, made by ladies of the congregation, and by March 1905  extra services were added on Friday and Saturday evenings.

The Rev Hyla Holden was thoroughly involved in community service, not only as a member of the Upminster Parish Council and Captain of the Upminster Fire Brigade but also serving on the Romford Rural District Council and as a Member of the Romford Board of Guardians.  A keen sportsman and an active member of Upminster Cricket Club he also played tennis and hockey, and he also established the popular May Festival. The Rev Holden’s incumbency covered Upminster’s rapid growth with the Garden Suburb and later developments.  After a series of repairs and improvements to the church, including gas lighting in 1912,  St Laurence’s was significantly enlarged  in 1928–9. The Rev Holden retired after almost 40 years of service in 1943 and sadly died the following year. 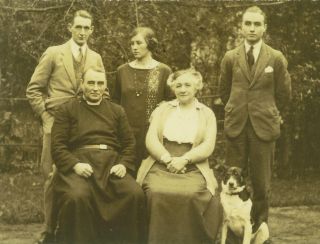 Rev Hyla Rose Holden (pictured above top left) succeeded his father – the fifth successive member of the Holden family to serve Upminster – and remained as Rector for 27 years until his retirement in 1971, bringing to an end an era of 191 years.

1 Response to The Holden Family – Rectors of Upminster